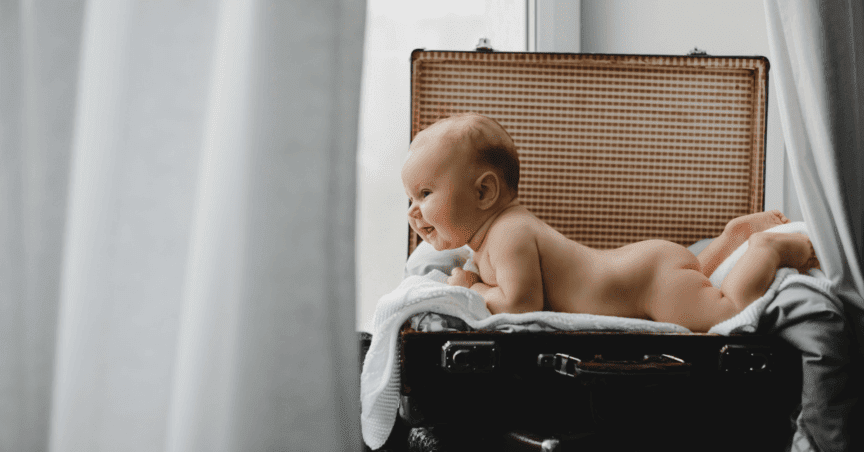 Samuel L Jackson and his snakes have nothing on young kids when it comes to striking fear into the heart of any traveller. There are few things that parents dread more than boarding a plane with a child between the ages of birth to 4 years old, but the crawling through easily bribed ages seem to be particularly difficult. Having logged many miles with our kids we’ve discovered a few tricks that work well for keeping even the most tyrannical travelling toddler tied up for hours.

7 Tips For Traveling With Toddlers

Choose snacks that are treats for your child – ones that are out of the ordinary from their dietary routine. No mess is also definitely a must so we pick things like dried fruit (raisins, cranberries, apricots), cereal sized nibbles (Cereal, fruit and veggie bites or puffs), and mini cheese. Everything can be a game, and food is no exception. We pack just a few pieces into several small containers and kept the sources hidden. You can also choose containers with different styled lids – pry lids, snap lids, twist lids etc. The small amounts kept mess at bay and keep kids entertained opening each new container!

Toddlers go through a significant fine motor sensitive period so you can use this to your advantage when choosing those few brand new toys that everyone recommends for travelling with children. A second-hand Mr Potato Head or an inexpensive shape sorter will both big hits. That they both self contain their pieces is a traveling bonus! Books are always a big hit in our house and are relatively compact for travelling purposes.  Look for interactive type books. We once lucked out finding an awesome Curious George book full of mirrors, as well as a lift the flap book that fit right into the fine motor theme. Toddler Jackpot!

Making time and space for gross motor movement is essential – even on a plane!  It can sometimes work in your favour to check in online right at the beginning of the 24 hour window and leave an empty seat in our row, hoping  that no one else books it. If you are lucky, and that gives your climber space to go up, down and around without disturbing others. We also take opportunities between food/drink service to take little walks up and down the aisles to stretch their legs and give a change of scenery. Often you can find other munchkins the same age which gives another way to pass some time!

If you breast feed, your comfort items are always packed (ha ha), but if your little one is a bottle and soother kid, make sure to have an empty bottle packed and 1 or 2 packages (2-4 soothers total) on hand as they do get dropped and Iwe don’t recommend putting anything in a child’s mouth that has touched an airplane floor. Most airlines will give you free milk for a bottle and even warm it up for you. Also bring their blanket to help them understand bedtime signals even when in a chaotic environment. Sometimes it works, sometimes they will only fall asleep 10 minutes before deplaning. We suggest saving the iPad and phone as last resorts partly because they don’t always need them to make it through a trip, but mostly because  once they come out, they won’t be given up without a fight. If your toddler is in a big animal phase, there are great, free apps that have real animal photos, say the name and make the sound. My kids have also been in heaven exploring Netflix.  Some favourites like Team Umizoom and Super Why! not only have great educational content, but were also filmed or produced in Canada or feature Canadian talent. Win-Win! While WiFi is slowly coming to airlines worldwide, these shows are a ifesaver during those long airport layovers! Despite the most meticulous planning, things happen. And usually they will happen all over you. Our rule is to never travel without a change of clothes for the kids and for any adults. There is nothing worse than being trapped on a long flight with a miserable baby while you are covered in milk, puke, pee or fill-in-the-blank. Even just a spare shirt can mean the difference between hardship and utter misery.

These are my tips accumulated over many many trials and errors. Tell us what helps you to survive travelling with toddlers? Heather is a Toronto born mama of two whose parenting journey has taken her family coast to coast across Canada. When she’s not whipping up recipes for the Healthy Family Living website or sharing the latest fun Vancouver events on HFL’s Facebook page,  she’s a freelance writer that has recently been published in an anthology entitled BIG, as well as in the Huffington Post, as she and her hubby of 13 years attempt to keep up with their two spirited girls and 3 fur babies!

TRAVELLING ALONE WITH KIDS – THE DOCUMENTS YOU NEED

YMCA OVERNIGHT CAMPS FOR EVERY CHILD Have you been to Deer Lake before? This is an ea

We had so much fun this week with Family Food Chal

Happy Father's Day to all the Dads, stepdads & fat

Which new fruit or veggie did your team try for Fa

Teaching kids where plants or food comes from and

Family Food Challenge #5 was SO. MUCH. FUN! ⁠⁠